Chairman of Property Rights Australia, Joanne Rea has claimed that the recent fine of $110,000 plus costs imposed on South West landowner Trent Hindman for renovating country degraded by Turkey Bush (Eremophila Gilesii) so that the native grasses could be allowed to regrow shows the unacceptable activism of some government officers.

Remarks in court by Andrew Franks of the Queensland herbarium that if native grasses were allowed to grow, livestock would be run on the country and livestock cause erosion, are extraordinary.

Under the law as it stands not only are livestock not illegal, but the growing of livestock is the very purpose for which leasehold land rental is paid to the State Government in Queensland by leaseholders including Mr. Hindman.

Much was also made of the fact that Mr. Hindman admitted that he had attempted to plant Buffel grass, a non-native grass which is excellent for preventing erosion but proved unsuitable for his area.  Buffel grass is also not illegal in Queensland but leaseholders are being discriminated against for having this productive grass in their paddocks.  This discrimination is unacceptable.  To paraphrase one of the justices in a previous Vegetation Management case “DERM (with apologies) may have said this but the parliament did not.”

According to Mr. Franks the clearing of native vegetation tends towards “landscape fragmentation, habitat loss, weed invasion, soil loss, loss of nutrient cycling increased greenhouse gases and a range of other effects.”

Property Rights Australia Chairman, Joanne Rea said that it is very important to understand that this very general list of Mr Franks was in fact evident before clearing because of land degradation caused by the invasive nature of Turkey Bush and many of these effects would have been vastly improved by Mr. Hindman’s treatment as can be seen from the pre-treatment photograph.

Mr. Hindman bought the property intending to return it as closely as possible to its pre-settlement state of semi-open grassland with predominately scattered box trees.  As seen in this second photograph the area in question was not broad-acre cleared bur rather cleared very selectively to return it to a more natural state. 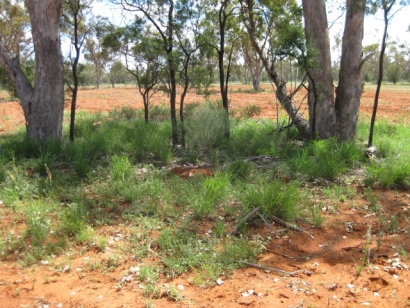 Joanne Rea said that it is of great concern to Property Rights Australia that DERM has taken the path of prosecution for clearing invasive species against the landowner, Trent Hindman and that it has allowed its decision making to be influenced by unprofessional activism.

It must be remembered that the green Turkey Bush at Mr. Hindman’s property today was not part of the original landscape and has totally degraded the productive capacity of the affected land.

Property Rights Australia advocates that this degraded land be returned to its original pre-European floristic vegetation mix and tree density.