“The erosion of private property rights is the single biggest issue

People from all States, this is a Federal Senate Inquiry so it is relevant to everyone. The Inquiry is looking into the adequacy of Australia‘s legislative, regulatory and policy framework for unconventional gas mining including coal seam gas (CSG) and shale gas. The terms of reference are broad so all grievances can be covered: – http://www.aph.gov.au/Parliamentary_Business/Committees/Senate/Gasmining/Gasmining/Terms_of_Reference

The PRA board would like to encourage you to either write your own submission or make contact with the office or a board member so we can write up your case to be included in the PRA submission.

All impacts can be covered, water, weeds, dust, noise, amenity of life etc. The board is interested in any accounts of the gas industry being misrepresented when you were first approached. That undertakings made by the gas company were not carried out; if you were lied to, subjected to a campaign of tactics, intimidation or even if threats were made against you. What productivity losses have you incurred and if the compensation received come anywhere close to cover these losses. Under the inquiry’s terms of Reference “c) government  and  non-Government  services  and  assistance  for  those affected”  and  “e) compliance and penalty arrangements” in Queensland landowners case would cover examination of the Gasfield Commission and the CSG Compliance Unit.

Anyone with a confidentiality clause in an agreement with a gas company, don’t leave that stop you from making a submission but make the request that your submission is kept private and not made public on the inquiries web page. If you check your agreement it should specify what you have agreed not to publicly talk about, sometimes its compensation amount only, and you can publicly talk about everything else.

Since last week’s newsletter than were 2 press articles on Friday. Attached is the article that appeared in The Australian. This is a link to the article at Beef Central:- http://www.beefcentral.com/news/nationals-accuse-public-servants-over-reaching-in-tree-clearing-threats

In these articles The Federal Environment minister, Greg Hunt’s statement was to clumsily shift blame to the Queensland government to a peripheral issue. Minister, it is your role to manage the department and ensure that the Act is administered in a fair and honest manner.

This week Greg Hunt has taken the position that he has to stand by his department administrating the Act. The PRA board will vigorously point out that the department has misrepresented the Act and will back this up with written legal opinion.

This is an issue that government and compliance bodies’ actions so far have been inadequate. Landowners and their advocacy organisations especially the Basin Sustainability Association have pointed out the inevitable when the coal seams are depressured to allow the gas to move that it will move not only up the gas wells but natural fractures, eg. bubbling in Condamine River, landowner water bores and the tens of thousands of coal exploration holes.

Resource companies have deeper pockets than agricultural producers so it will be interesting to sit on the sidelines of a legal case between a coal company and a gas company.

Sadly we learnt the news that Professor Bob Carter has died as a result of a heart attack at only the age of 74. Those who spoke to Bob in person knew a man who was interested in others, warm, positive and never became bitter despite of the attacks on him. PRA had contact with Bob over the years in his expertise in marine science especially in regards to the Great Barrier Reef. Professor Bob Carter’s academic credentials were impressive.

He was a guest speaker at the PRA conference in 2010 where he spoke about the climate change issue. Often not directly intended, it is proposed solutions to climate change or political posturing on the issue (eg. Former PM John Howard encouraging tree clearing laws to meet Kyoto targets), that has been a major source of the erosion landowner’s property rights in recent times. 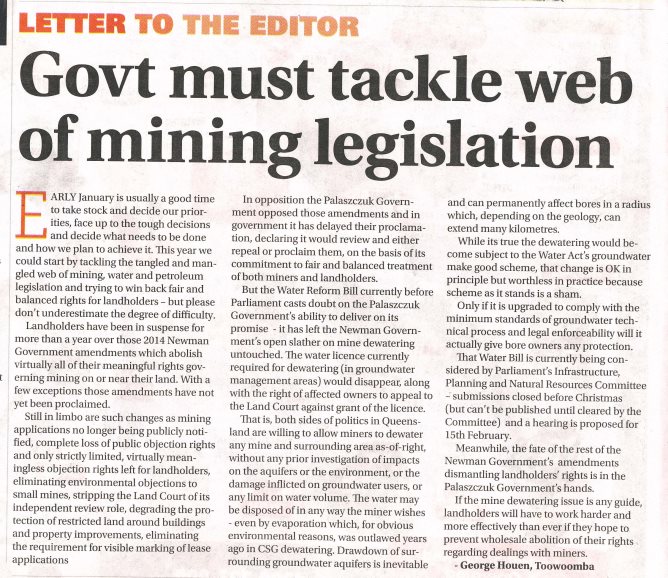 Queensland farmers are being threatened by the federal government with fines of up to $900,000 for clearing land under permits granted by the state government.

The threat of the fines has sparked anger within the Coal­ition as Nationals accuse the federa­l Environment Department of overreach.

Landholders with properties as small as 10 hectares who have been granted land clearance permits by the state government received letters in December from the federal Environment Department warning them that their activities may still have the “potential to impact on matters of national environmental significance.”

The letters — one of which was obtained by The Australian — informed landholders they could be in breach of the Environment Protection and Biodiversity Act and that “substantial penalties apply to a person who takes such an action without approval.”

Breaches of the act can see indiv­iduals fined $900,000 and companies up to $9 million.

In one letter, dated December 10, the federal department requests that the landholder provide information by December 23 demons­trating that land clearance had not negatively impacted on “matters of national environmental significance.”

Nationals MPs seized on the case yesterday, warning that the bureaucratic overlap put at risk plans to develop northern Australia while placing farmers in a position where they could be lured into paying millions just to prove compliance with the EPBC Act.

Property Rights Australia chairman Dale Stiller said the letters were a form of “entrapment” for farmers because responding to the letter would trigger a costly engage­ment process under the EPBC Act.

He confirmed that his group had written last week to Mr Hunt asking for the letters to be withdrawn, but had not yet received a response.

The Australian understands that as many as 70 landholders have received the letters, with Senator O’Sullivan likening the situation to something out of farcical TV comedy Fawlty Towers.

“I can’t believe that we are so incompetent either at the Queensland government level or the federal government level that we would issue permits at a state level that would appear to give the landholder lawful rights only to put them at risk with the EPBC Act,” he told The Australian.

“If this is an example of how we’re going to go about developing northern Australia, then it is going to have a negative impact on invest­ment confidence.”

Recipients of the letters have since received advice not to respond­ to the federal department, due to the risk of triggering responsibilities under the EPBC Act.

“If a landholder does make the referral, he has then engaged the (federal) department through the EPBC Act,’’ he said. “He will then have to provide scientific evidence as to all that might impact on the matters relating to the location’s national environmental significance at his own cost.”

A spokesman for Mr Hunt said yesterday the department had a “responsibility to ensure that there are no breaches” of the EPBC Act and blamed the Queensland government for blocking attempts to reduce red tape.